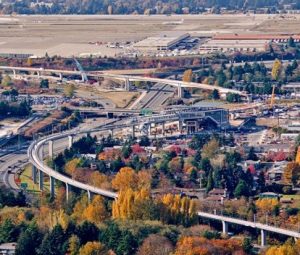 CTS was involved in this project from 2002 through 2009. The firm’s role was to provide the civil and structural design interface for an elevated, 7-mile-long segment of Sound Transit’s Link Light Rail Project from Seattle to Sea-Tac International Airport.

In addition to the above civil and structural design, CTS’s responsibilities included traffic signal and illumination design, traffic control during construction, and wetland mitigation reviews. The 100% PS&E submittal for this project was completed in several phases. CTS also provided on-call services during construction.