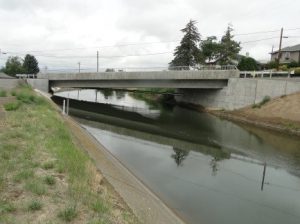 Yakima County selected CTS Engineers to prepare plans, specifications and estimate (PS&E) for replacing Hillcrest Drive Bridge #160 over the Roza Irrigation Canal in Yakima. A geotechnical study was performed to investigate the condition of the existing abutments and determine their suitability to support the new superstructure.

It was determined that both abutments should be replaced. Six prestressed-concrete W53DG girders were selected to replace the superstructure, providing a width of 36 feet, and a span of 94’. The abutments and wingwalls were designed as cantilevered, reinforced-concrete retaining walls.

The 95% bridge PS&E was performed in accordance with an aggressive schedule in case new stimulus funding became available. Construction funding was obtained by the County, and the 100% design was completed by CTS in August, 2012. Construction began in the Fall of 2012, and the project is now complete. CTS provided on-call services during construction.